Development of a 27.5-acre recreational park.

Prohuis is busy developing a 27.5-acre recreational park. Features include catering, an arcade, a large indoor and outdoor playground. With as many as 500 parking spaces.

BERGEN OP ZOOM – A 27.5-hectare recreational park. Including catering, an arcade, a large indoor and outdoor playground, place for workshops, for parties, a corn maze. With as many as 500 parking spaces.

That ambitious plan is what property developer Prohuis has submitted to the municipality of Bergen op Zoom for a plot on the Moerstraatsebaan. It involves a large portion of the area previously in the picture for the development of a golf course by Holding Bergsche Heide. That plan did not go through. The plot is located against the border with the municipality of Roosendaal (Moerstraten).

Nothing has come out about the recreational park so far. Berg alderman Patrick van der Velden confirms that the project is indeed being discussed. “For a year and a half now.” And so says Arjan van de Graaf of Prohuis as well. This developer has so far become best known for the plans for Port of Bergen op Zoom, the plan for a hotel, fast food restaurants and an ultra-modern gas station right along the A4 in Bergen op Zoom. Near the exit to the Randweg Noord.

Clock’uus
According to Van der Velden, Prohuis is more or less taking over the development of the area around De Heide nature reserve from Holding Bergsche Heide. That developer didn’t do what it promised. Thereupon, the agreement between the Bergen op Zoom municipality and HBH came to an end.

According to Alderman Van der Velden, the Klok’uus in ‘s-Heer Arendskerke, near Goes, is a model for the plan on the Moerstraatsebaan. “It’s all about the look and feel of Klok’uus.” This large Zeeland indoor and outdoor playground that has successfully existed for more than 15 years offers something for everyone. From solextour and farmer’s golf to a restaurant with local dishes. But corporate outings and team building are also on the range of activities on offer.

Refurbishing
Developer Van de Graaf said the current properties on the site, including sheds and a farmhouse, will be refurbished. “We will leave them intact and renovate them.” Those buildings will soon house a significant portion of the activities. There will also be additional trees. “We want to return to the landscape as it used to be.” The intention is to implement the plan in phases, Van de Graaf emphasizes. “We would prefer to start as soon as possible, but are still waiting for the municipality. 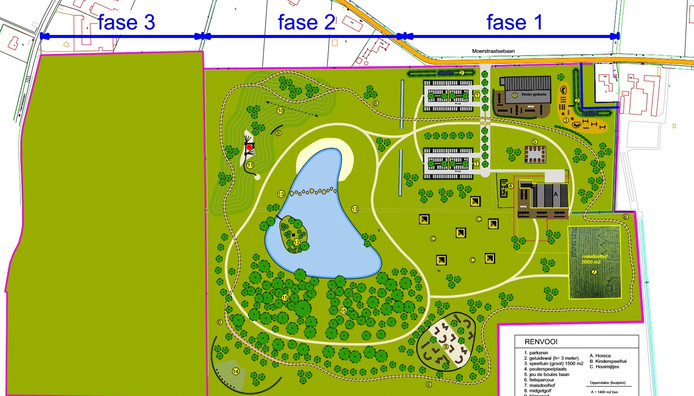 Completion of Reflection Street in Nootdorp.

The final phase Wattstraat 90 & 92 in Zwijndrecht

Join us for coffee

And we look at your project together